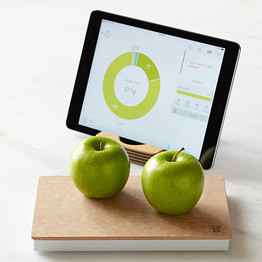 Although kitchen and appliance brands like OXO or Vitamix roll out plenty of sturdy new tools for home chefs each year, the founder of The Orange Chef Co. in San Francisco, Santiago Merea, believes it is time for a new brand to use technology to make “everyone confident in the kitchen.”

The low-tech Chef Sleeve (available for $20), was The Orange Chef’s first offering, a simple cover for the iPad that allows cooks to work a tablet touchscreen without getting it greasy or dirty in the midst of making a meal.

The company also makes an iPad stand ($40), a cutting board that can hold an iPad ($74.95), and something distinctly higher-tech called the Prep Pad ($150), which is an Internet-connected food scale and accompanying iPad app, called Countertop, that gives users extensive nutritional data about what they’re making.

Ms. Foss said her team discovered The Orange Chef when the startup ran a crowdfunding campaign on Kickstarter. The already revenue-generating startup raised $46,850 using the crowdfunding site in May 2013 to support the production of its Prep Pad smart scale and accompanying Countertop app.

The Prep Pad allows a user to place a single ingredient or entire prepared meal on a digital scale, log the name of the item or meal into the Countertop app and get at-a-glance, detailed nutritional data.

The Countertop app used with the Prep Pad is voice-controllable. But users can also enter their ingredient or meal names by touch-typing.

Mr. Merea said the idea behind the Prep Pad and Countertop app was to “connect people to their food” and “make recipes come alive with information.” He said that kids of early Prep Pad adopters have been “putting food onto the scale to see the data like it’s a toy,” which he considers a big compliment.

Ms. Foss of Williams Sonoma said the retailer decided to carry these products because of the health-consciousness of its customers. “[The Prep Pad] is all about living a healthy lifestyle and understanding the dynamics of nutrition and a balanced diet. Also, our customers have shown through the smart tools we already offer a real penchant for bringing technology into the kitchen.”

Lerer Ventures Principal Taylor Greene adds that, according to original research by his firm, about half of people who have an iPad use it regularly in the kitchen today (one reason his firm backed The Orange Chef).

Another recent investor in the maker of smart kitchenware, New Enterprise Associates Partner Patrick Chung, says the Prep Pad can make ordinary people “bionic” in the kitchen, “giv[ing] them the tools and confidence to create marvelous, healthy meals.”

The Orange Chef plans to use its seed funding on hiring, and to fulfill pre-orders for its Prep Pad, this year. Longer-term, it will also market and advertise its existing products, and develop new apps and tools including more connected hardware for the kitchen, according to co-founder Michael Tankenoff.