Why video will have a more profound impact on our lives than the Internet
Frank Meehan's guest post at VentureBeat, Oct. 29, 2013 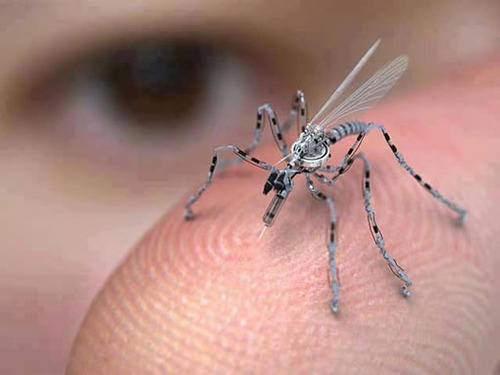 When Google Glass came out, the most interesting thing for me was not the innovative device control, as amazing as that is. It was the ability to hands free record in video everything going on in front of you.

Google Glass is just the beginning. The rapid deployment and continued miniaturization of video cameras everywhere will force even greater tectonic shifts in humanity than Internet itself. Because while you can opt in and out of the web, you will soon not be able to opt out of cameras recording your every move, wherever you are, and often without your awareness.

Angela Merkel and other European leaders may be upset about having their mobile phone conversations monitored, but wait until micro devices similar to the one below start to record their every move in HD video!However, despite the fears of “Enemy of the State” scenarios, I foresee that this will also herald an “Age of Truth”. It will be very difficult to lie when everything is recorded on video, and this will have a tremendous impact on how we interact with people, on the law and insurance industries, on the police, business and practically everything else. And a whole range of new startups will spring up to deal with the storage, analysis and control of such a vast amount of video.

Three recent observations have reinforced this trend in my mind.

Firstly I was in South Korea this week, and noticed that most cars in Seoul have HD video cameras fixed to their windshields, like in the picture I took below. 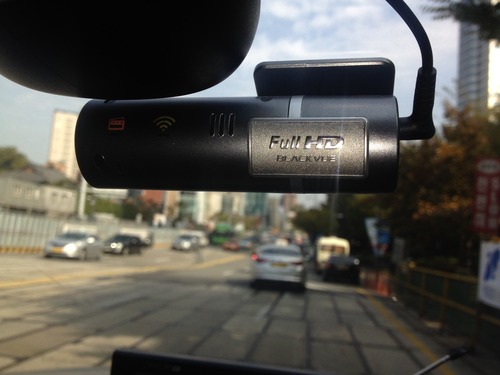 Everything is recorded on SD cards, and most importantly, the driver gets 5% or more off their insurance IF they install a camera. Which of course makes perfect sense. The insurance company doesn’t have to deal with considerable paperwork and working out who is telling the truth in an accident, they just review the footage and quickly see the truth.

Secondly: the recent incident in Brazil on YouTube below, which shows high quality helmet cam footage of a Brazilian bike thief getting shot by police during an attempted motorcycle robbery. 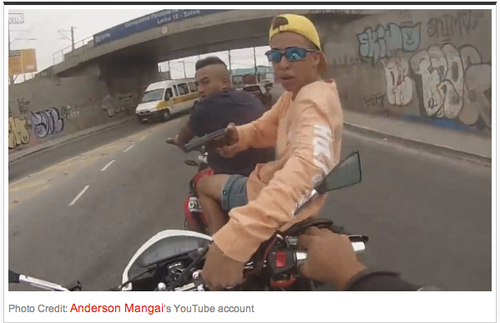 A number of significant happenings occur in this video:

- The person whose motorbike was stolen has the proof for his insurance company on video. He didn’t lose the bike, nor did he set up the heist.

- The cop who shot the hijacker is cleared.

- The hijackers family cannot claim that the cop acted unfairly, was targeting or was racist.

- The need for lawyers to resolve anything is greatly reduced.

I can see this trend only increasing. Of course, companies and governments will initially try to limit or ban headsets and other wearable tech with video cameras. Already the UK department of transport wants to ban wearing Google Glass while driving. However I foresee that insurance companies in the UK and US will also realize the advantages of the Korean system, and reduce premiums for vehicles equipped with video cameras.

But the pervasive nature of the devices, and their increasingly microscopic size, will mean that despite the best efforts of companies and governments, video recordings of interactions will occur.

For instance, sexist, bullying or racist behavior in the workplace will be filmed without the perpetrator knowing, and it will make it very difficult for them or the company to deny it. Leading to an explosion in video driven litigation, but also perhaps to better workplaces?

And very interestingly, nearly all interactions between citizens, criminals and the police will be captured on camera. Will this result in less crime and more honest policing? Imagine this scenario: a house is wired up with cameras everywhere. Inside they are switched off for privacy and family reasons. But lets say a burglar tries to enter the house. The occupant could easily have the control to the system on their SmartWatch or other device. Instantly they can switch the system on with one “click”. That also activates the police. Who can see a live stream of what is happening and intervene accordingly, especially in hostage situations. If this reminds you of Minority Report, then remember that film was based on the predictions from a group of the finest minds in tech at the time, many of which are coming true faster than they anticipated. 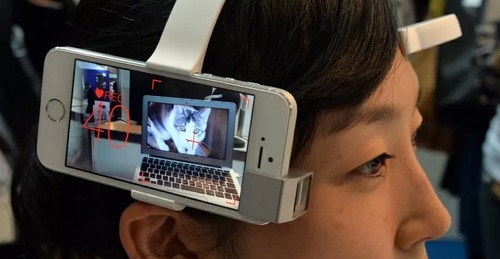 New companies will spring up to address the huge markets created by this change. For instance:

- Live video feed control technology, such as that developed by Korean startup N3N (http://www.n3n.co.kr) which is already deploying amazing video control room technology that is far ahead of anything on the market today.

- Wearable tech and drone companies will continue to develop a wide range of products, from the micro small to large high altitude craft. Most of which will carry cameras.

- Security startups will work to find ways of blocking cameras, or distorting recordings.

Some of this may seem far-fetched, but human ingenuity being what it is, it will get happen. Video will radically change how we behave and react. It will make us stop and think before acting. And it will fundamentally change the law, insurance and policing/security sectors. Why would you need a lawyer at all? Perhaps it’s just a question of processing the video and acting accordingly?

Without a doubt, video will kill the privacy star. And what happens next will result very major shift in human behavior.