Young Koreans learn from Start-Up Nation
Net Jacobsson interviewed for this article at The Times of Israel, Jan. 29, 2014 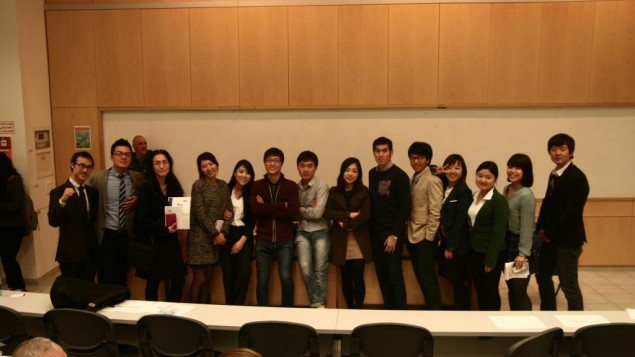 Some 100 people gathered for the Korea-Israel Entrepreneurship Forum (KIEF) Monday evening at Tel Aviv University in a program that seeks to grow economic partnerships between the two countries. Attending the event were young Korean entrepreneurs, Israeli students, Korean diplomats, Israeli tech and start-up veterans, as well as several seeking to build business ties.

The event was the closing one for KIEF, a 6-month program in Israel for 15 Korean aspiring entrepreneurs that was run together by StarTAU and Small and Medium Business Corporation (SBC). The participants were paired up with Israelis mentors, and worked at internships with companies like Wix, Ginger, Giza Venture Capital and others. Of course, they toured through Israel as well.

There was one hiccup during the program, as the Korean participants were almost sent home prematurely due to visa issues, admitted Amos Avner, the International Director at StarTAU. Thanks to the help of “the right people,” the visa situation was sorted out and the program continued as planned, he said.

The theme of the event was developing mutually beneficial relationships, said Korean Ambassador to Israel, Mr. Kim Il-Soo. “We have a lot in common, but we have many differences too,” said Kim, adding that the program “could be potentially great between our two countries if we combine our entrepreneurs and vision.”

Ami H. Orkaby, the Honorary Consul General for the Republic of Korea, who spoke at the event as well, said that he had taken in two interns to work for MAC Fund, the first Korean-Israeli fund, as well as the Korea-Israel Chamber of Commerce. Orkaby spoke of Israel’s need to learn from Korea on how to build conglomerates, referring to the growing sentiment in Israeli high-tech circles to curtail the trend of exits.

Net Jacobsson, a Swiss immigrant and co-founder of Sparklabs Global Ventures — a new seed-stage investment fund that invests between $250,000 to $1m in start-ups with a global approach from the get-go — spoke of his experiences in Korea. Jacobsson said that there was more interest in Korea among Israeli companies as a stepping stone to break into the Asian market. Thus far, Sparklabs has invested in eight companies, two Korean and one Israeli (Parko).

The evening ended with seven pitches from the young Koreans. Several of them escaped to the more quiet edges during the networking session to rehearse their pitches, and more importantly, their English, while others sought last minute tips from their mentors. Fighting off the visible nerves, they presented their start-up ideas, such as gait-correcting sneakers, a computer programming education platform and an East Asia networking platform. With the experience in the Start-Up nation under their belt, said participants, they felt more ready to delve into their own business projects, with greater confidence than ever.