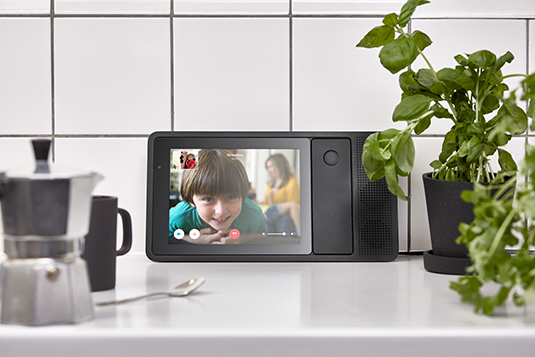 Insensi has been working hard on a brand new device to make it easier to communicate with other family members. The device, Ily, is a modern take on landline phones that is so easy to use that children and grandparents don’t need directions. Ily is now available on Kickstarter for $149 to $199.

The startup participated in our Hardware Battlefield competition in January. Ily isn’t a tablet or a phone. It’s something you put in your kitchen or your living room and interact with every day. Ily also supports Amazon’s Alexa voice service.

On the front, you can see an 8-inch touchscreen running software specifically designed for this device. It also has a camera, a microphone, a speaker, proximity sensors as well as temperature and quality of air sensors.

And then, it’s all about communicating with your loved ones who aren’t around. You can call them in one tap, send drawings, video messages, text messages, etc. Ily wants to foster any kind of interactions between children, parents and grandparents.


It’s also worth noting that there isn’t any browser on this device so you don’t have to watch what your kids are doing with it.

But what if your step parents don’t have an Ily? The company will release iPhone and Android apps so that you can keep up with your family from your smartphone. Unlike FaceTime, it works on both Android and iOS, unlike Skype you don’t need to sign in to become reachable. These mobile apps will be particularly useful when you want to share photos as well. Ily creates a simple family photo stream so that grandparents can see their grandchildren for example. With the Ily mobile apps, you can upload photos to this stream directly from your phone.

When I first interviewed Insensi co-founder and CEO Ilan Abehassera, he told me he doesn’t believe in the traditional Kickstarter path. Usually, companies launch a campaign, grab a lot of money and then… disappoint with delays and design changes.

Ily doesn’t want to be yet another Kickstarter failure. So the company has been ramping up productions over the past 10 months so that it can ship as quickly as possible after the campaign ends. In fact, backers can expect to receive a device this summer.