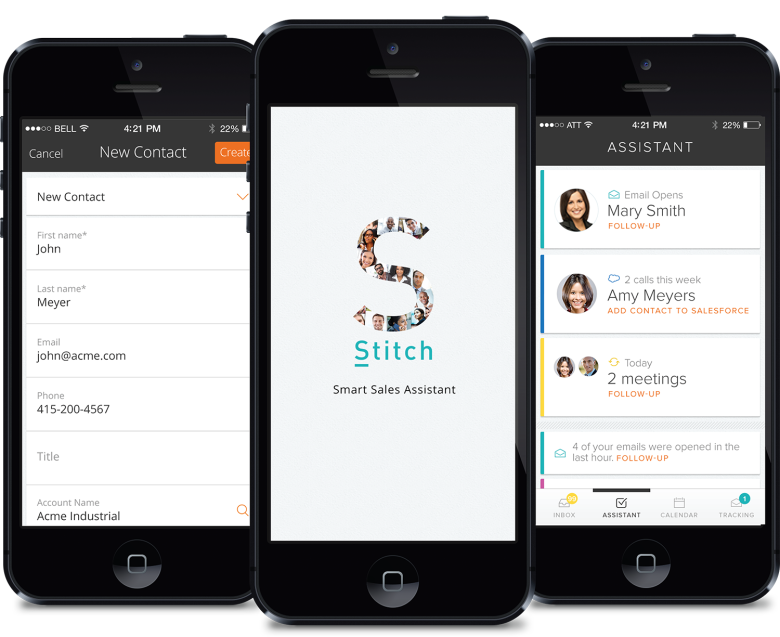 When Stitch launched its original email app for salespeople, it packed it with special features such as email templates, open and click rates, quick gestures to confirm or follow up on emails, and more.

Today, the company is releasing a new version of its app that will have something extra with it: a digital email assistant. Well, actually its a whole bunch of fancy algorithms and machine learning, but they feel like an assistant.

In the new app, in addition to the power-charged email client, Stitch will now also present a salesperson with a personalized feed of recommended actions. The main section of the feed will include items such as upcoming meetings (pulled the user’s calendar), suggestions for a “running late” email when appropriate, prompts to confirm meetings, a prompt to follow up with a prospect, and suggestions to add new contacts into Salesforce.

The bottom of the feed will have more auxiliary suggestions, such a contacts a salesperson might want to touch base with if they haven’t communicated for a while, or a roundup of emails opened in the last couple of hours they might want to follow up on.

The idea with the suggested actions is that the more the salesperson interacts with them, the better the system learns their preferences and how to serve up better suggestions.

“The vision of the assistant to take the manual to-do list and automate it as much as possible,” co-founder and chief executive Somrat Niyogi told VentureBeat in an interview.

Stitch’s new smart assistant could be a good step to help it differentiate itself from competitor Yesware, which only recently launched on iOS.

While Stitch is only available for Google Apps at the moment, it plans to add Microsoft Exchange support soon. It’s also working on landing on Android soon as well.

Stitch has amassed 30 customers since its founding in 2013 by Jason McDowall, Wiebke Poerschke, and Niyogi. The company raised $3.3 million in seed funding in April from Google Ventures, SoftTech, Freestyle Capital, Foundation Capital, ENIAC Ventures, Brad Garlinghouse, Tom Conrad, and Eric Hahn, among others.