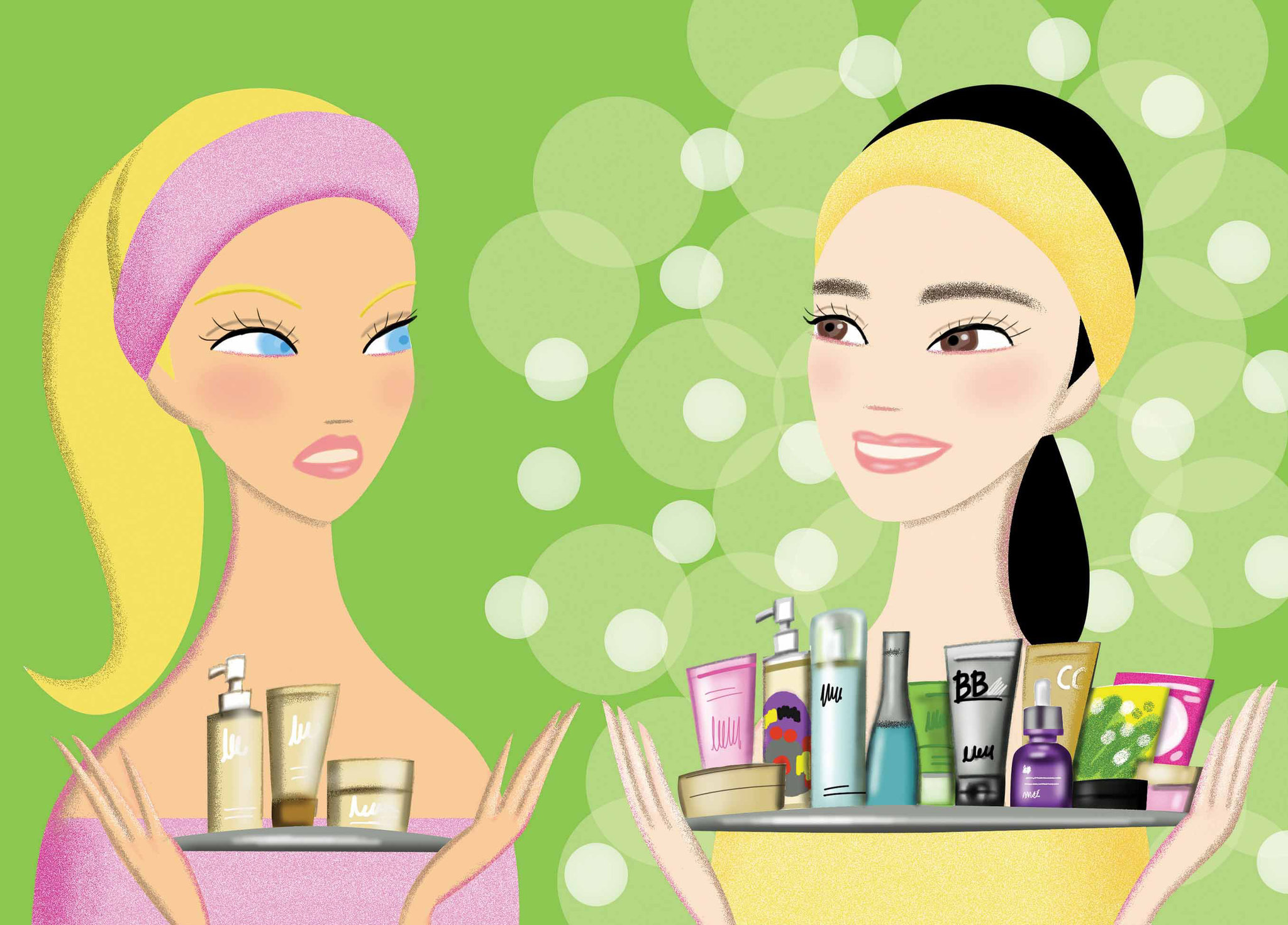 First came the wave of manufacturing, with Samsung and LG; then the K-pop stars, whose ubiquity reached its regrettable height with Psy. Now comes the latest import from South Korea: a formidable array of beauty products.

It all started with the BB cream. In early 2011, the Korean brand Dr. Jart introduced two BB creams at Sephora in the United States. They had dermatologic roots, intended to protect and heal patients’ skin after treatment, and had been popular as all-in-one skin-care and makeup products in Korea for several years before they came to the United States.

The cream was a hit. Major beauty companies took note. Soon enough, it had spawned versions from L’Oréal, Smashbox, Clinique, Jane Iredale, Stila and Dior — and paved the way for a Korean beauty invasion of the United States.

The beauty market has long been led by European countries, which were thought to be the source of innovation. But in recent years, American women (and beauty companies), their interest piqued by the BB cream, began to look more closely at Korean multistep skin-care regimens, and they liked what they saw.

“It shifted our consciousness on what it means to take care of your skin,” said Megan McIntyre, the beauty director at the lifestyle site Refinery29. Seeing the care Korean women devote to their skin made consumers curious about new techniques, Ms. McIntyre said, adding that the often adorably twee packaging, high-tech innovations (peel-off lip stains, overnight masks) and affordable prices have not hurt, either. But let no one think that Korean women just slap on a BB cream and call it a day.

“The American approach is: the simpler the better, the faster I can get out the door,” said Cindy Kim, a founder of Peach and Lily, one of a number of online retailers, including Soko Glam and Memebox, that sells Korean beauty products. “The Korean mentality is comprehensive and detailed.”

And it is exhaustive. First, there’s cleansing, often with two different cleansers (one oil-based to remove makeup, then a foaming cleanser), followed by a toner to balance pH levels on the face.

Then there are “essences” and serums, which is “where the number of steps can blow up,” Ms. Kim said. The serums often target single issues: aging, radiance, hydration, redness. An eye cream, plus moisturizer, and BB cream (for day) or an overnight sleep mask are applied next and all sealed with a mist. There is even a term for the desired plump and sticky feeling after application of these products: “chok chok.”

Taking a half-hour for your skin-care routine “isn’t weird,” said Esther Dong, the senior vice president for marketing at the Korean line Amorepacific, whose Time Response anti-aging moisturizers are selling well in the United States. “When people describe a beautiful girl in the U.S., it’s all about the body, and the third or fourth sentence is about the face. When you describe a beautiful girl in Asia, it’s about her face and how pure and fine her skin is.”

Such standards are reflective of Korean culture at large. “The culture of South Korea is very much tied with technological advancement and the rapid pace of life,” said Richard You, the deputy general manager for Dr. Jart in the United States. “Everyone has a smartphone, is concerned about their looks, and companies are working around the clock to provide new products. Word gets around quickly regarding what’s working and what’s not.” In Korea, more than one television show is devoted to reviewing new beauty products.

Even if American women aren’t likely to massage five different creams into their faces for 30 minutes, they are willing to try new products. Alicia Yoon, the other founder of Peach and Lily, reported that most of its customers are non-Asian and that, month to month, its sales nearly double.

“The appetite is huge,” said Priya Venkatesh, who oversees the merchandising of products with Korean roots at Sephora. And not just for Korean brands. Korean-inspired masks and essences from Dior, Shiseido and SK-II are emerging as popular, she said.

American companies are also hoping to strike a chord with similar products. Peter Thomas Roth, a skin-care line in New York, makes a CC cream (a lighter sibling to the BB cream) in South Korea. Its answer to the Korean essence, a step between cleansing and treatment, is its Un-Wrinkle Turbo Line Smoothing Lotion. It also has a sleeping mask (a concentrated mask you wear overnight) and an oil-like product made from squalene, which comes from sugar cane and has long been popular in Asia.

For sure, there is an exoticism to Korean ingredients, with products like LadyKin Vanpir Dark Repair Cream (which touts Red Dragon Blood Resin Extract) and Mizon Returning Starfish Cream (with 70 percent starfish extract). Alpha-hydroxy acid-based peeling foot masks that remove layers of dead skin have been gaining followers here, the most popular being Baby Foot. (Best not to Google the product. Eeew.)

So pronounced is the interest in Korean products among Refinery29 readers that Ms. McIntyre recently hired Joyce Kong, a Korean-American writer in Seoul, as its Korean beauty correspondent.

“Every month there’s something new, so much of my job is to figure out, is this a fad or something that’s going to be a real trend?” Ms. Kong said. “There has been snail cream and snake venom lotion. Right now donkey milk is a thing.”

A contender for the next blockbuster is the single-use sheet mask, a piece of thin paper or fabric coated in active ingredients. “Say my skin routine focuses on hydrating and firming,” Ms. Yoon said, “but I’ve been tired so I want something to promote an inner glow. That’s where a mask comes in.”

In Korea, these are already ubiquitous. “You walk into any drugstore and there are walls filled with sheet masks that cost anywhere from $1 to $10,” Ms. Kim said. “They’re very much part of the routine over there.”

Ms. McIntyre said she thinks the next big things could be sleeping masks and cushion compacts, in which BB cream in a compact form comes with a spongelike applicator for a dewy finish.

One sure thing is that beauty companies will continue looking to Korea. Ms. McIntyre said, “It has become almost an arms race to see what the next big thing will be.”