This app promises to provide the care for depression patients that their doctors don’t
Fast Company, Dec 04, 2015

The Start iPhone app helps people figure out quickly if their meds are working and collects insights that might help other sufferers. 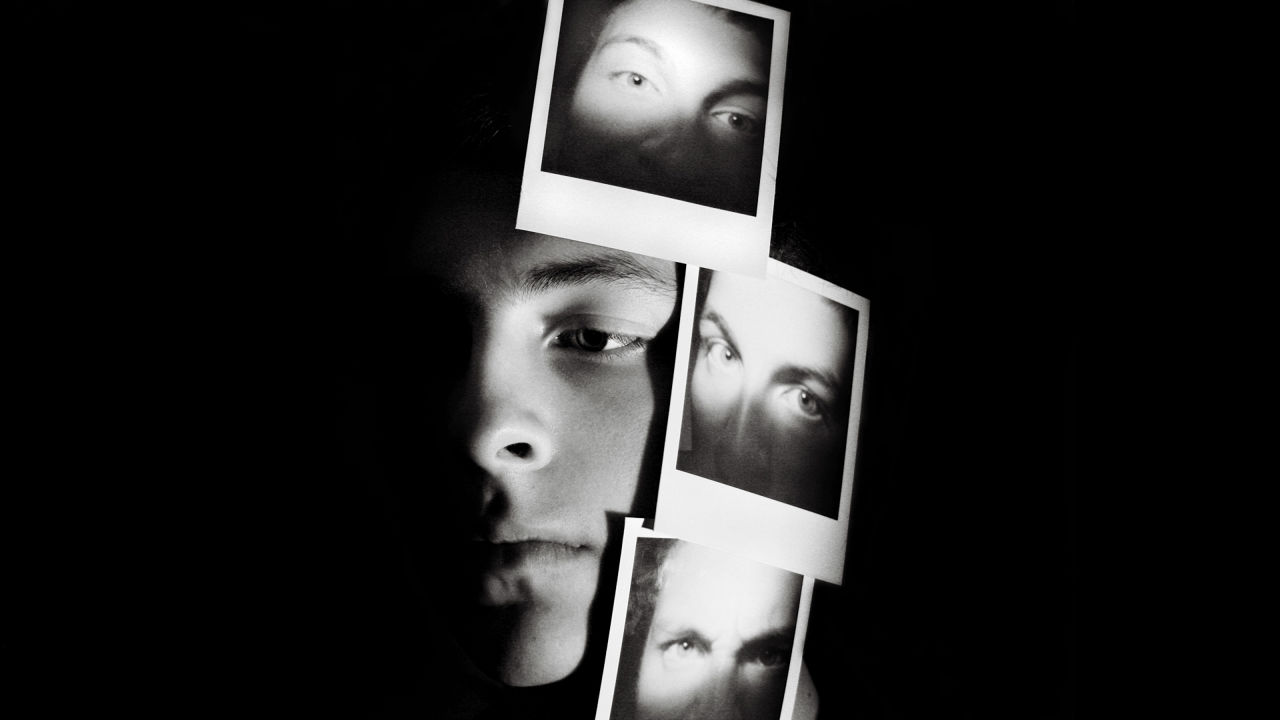 Thirteen percent of American adults take antidepressant medications, according to a Nov. 3 study in the Journal of the American Medical Association. That’s tens of millions of people using powerful drugs that work less than half the time, requiring patients to try several different medications, typically over six to nine months, before they find the right one. "We’re throwing pills at the problem, but we’re not giving people something to go along with those pills, which is namely the software that helps them understand: Is this working for them?" says Thomas Goetz, cofounder of patient-focused healthcare startup Iodine. The software Iodine offers is an iPhone app called Start that allows depression patients to track their progress and ascertain whether a new medication is helping, or if they and their doctor should try another.

Start is just the start of Iodine’s disease-specific apps, with one for chronic pain coming next. What both conditions have in common is that a patient’s own reporting is the measure of success. "There’s no blood test, there’s no lab test," says Goetz about depression. "If you feel like the medicine is working, then it is."

Start uses the Patient Health Questionnaire-9 (PHQ-9), a common, self-administered test based on the official diagnostic criteria for depression using nine questions, such as: "Over the last two weeks, how often were you bothered by feeling down, depressed, or hopeless." The multiple-choice answers range from "Not at all" to "Nearly every day." Start’s particular contribution is allowing patients to track their condition over time, by taking the PHQ9 test every two weeks, as well as answering questions that flag problems like weight gain or low sex drive. Start uses visuals such as line and bar graphs to illustrate the patient’s progress, or lack thereof. 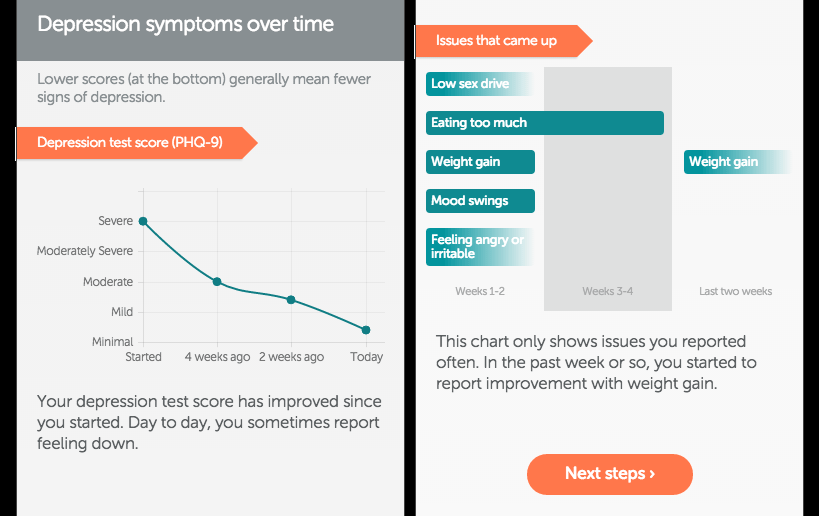 This is a lot more attention than most doctors provide for mental illness, says Goetz, a 12-year veteran of Wired magazine who served as its executive editor until January 2013. (I have written and edited for Wired and worked with Goetz on some projects.)

Nearly 80% of antidepressants are prescribed by doctors other than psychiatrists, according to a 2011 study by Johns Hopkins University. In more than 70% of the cases, the doctor isn’t even making a formal diagnosis of depression.

Docs don’t provide much follow-up, either, says Adam Baker, who worked on user experience at Google before joining Iodine as head of product design. "If you are put on a blood pressure medication, the doctor is going to get you back in the office pretty quickly and maybe have you monitor your blood pressure at home," says Baker. "It’s not like that with antidepressants. It’s a lot more wishy-washy, and we want to provide some structure." 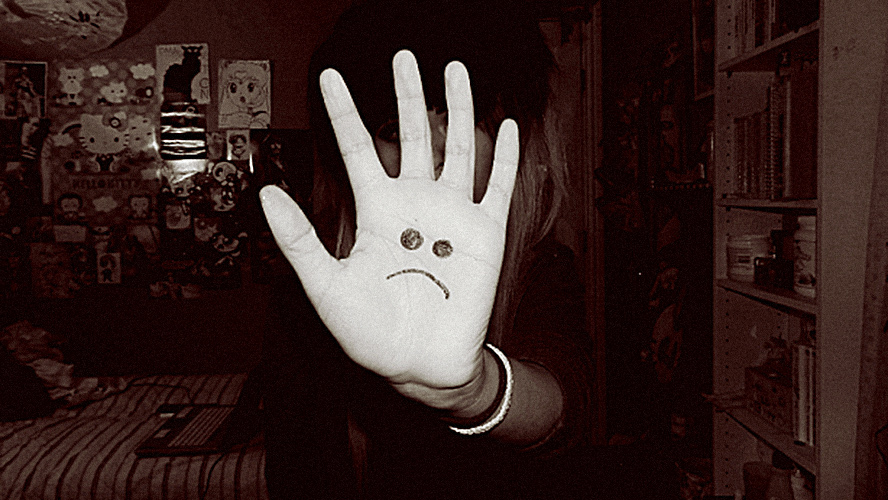 STARTING WITH THE PATIENT

In 2010, Goetz published The Decision Tree, a book describing how patients can use new data-driven tools such as apps, personal DNA tests, and websites like PatientsLikeMe to understand their health and direct their healthcare. Goetz cofounded Iodine in 2013 along with Matt Mohebbi, an ex Google engineer who developed the search engine’s Flu Trends tracking project.

Start marks a big switch for the company, which began as a drug-information site featuring patient-submitted reports (now totaling over 100,000) on how well a particular drug works for them—prompting Time to call Iodine the Yelp of medicine when its site launched in 2014.

"We really don’t have that much information about the patient’s experience from that one-time review," says Baker. "Quality control on the website versus the app are totally different beasts, and we think much richer on the app side." Data from Start, and future apps, in anonymous form, is what Iodine hopes to make money on.

Iodine is beginning to analyze the anonymous reports from patients to produce insights about a drug’s efficacy. "It could also allow for predictive analytics," Goetz tells me in a follow-up email, "such as whether a certain specific medication/dose has a high probability of working for a person, given their specific issues or concerns." The company plans to sell those insights to clients such as health insurance providers and companies called pharmaceutical benefit managers that handle the medication logistics for health insurance companies. Often this takes the form of call centers ringing up patients with reminders to take their pills. "It’s a multi-billion [dollar] problem," he says. "What we are trying to do is use software to accomplish that, not just by saying, ’Take your pills,’ but by trying to understand the higher-order questions of, is this pill helping you?"

I ask Goetz about how many people are using Start, which launched on September 1. Is it thousands? Tens of thousands? Goetz said that users number in the thousands, and gave his perspective on why that is significant: The biggest clinical study of antidepressant efficacy, the federally funded STAR*D Trial, enrolled 4,041 patients over a seven-year period. "Already we have more than that number of users," says Goetz, who quickly adds the caveat that Iodine hasn’t collected the same kind of data or over nearly as long a period.

There are a few other caveats. Iodine is only available on iOS devices, although an Android version is coming "in the year ahead," says Goetz. "You can’t avoid it, and we want to do it. We get requests all the time for Android." I ask him if that means Start, in its current form, is a measure of the mental health of iPhone users. "That could be a confounder," he says, after a pause.

Results may also be skewed a bit by the placebo effect, since they are based entirely on how patients say they feel. Whether a drug works chemically or psychologically may not matter for an individual: They feel better regardless. But one person’s placebo could provide false indications for how a drug will work for someone else. "I would love to say we have a perfect way to factor out the placebo effect, but we don’t," says Goetz.

Iodine’s data quality has earned the respect of Pro Publica, the nonprofit news organization famous for its deep investigative reporting in many topic areas, including its series on fraud and waste in prescription drug use. In mid November, the two organizations announced a partnership in which Iodine will feed its data on drug effectiveness to Pro Publica using Iodine’s new application programming interface (API). Goetz says that he is already talking to "about a dozen people" about also connecting to the API, including people from pharmacies, academia, and other startups. Access is free for now, says Goetz. "It’s basically a strategy [for us] to get exposure to those people and bring them back to Iodine and to Start."

Depression treatment is a natural place for Iodine to begin, says Goetz, because it’s such a big industry with a lot of waste due to ill-informed decisions. "So that is a classic optimization level where we thought software could help," says Goetz. Depression is also pervasive in our culture, affecting people either directly or through family and friends. "Entirely by coincidence…in the last year I’ve lost three people I know to struggles with depression and mental illness," says Goetz, "three suicides."