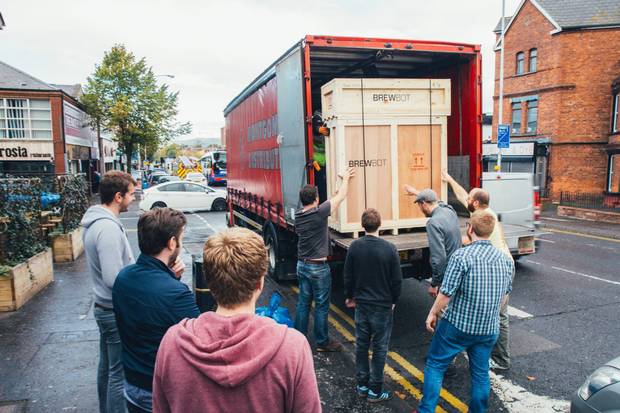 Belfast beer-making robot tech firm Brewbot has shipped its first systems to the US.

The company, headed by Chris McClelland (33), loaded the stainless steel and wood brewing machines on to a lorry bound for San Francisco this week, two years after getting started.

The firm’s product allows beer brewers to take a lot of the complexities out of the brewing process by using a smartphone app.

Its chief executive Chris McClelland said it was a "monumental milestone" watching the machines leave their brewpub and craft beer bar on the Ormeau Road in Belfast.

"The first of many Brewbots to leave Belfast today headed for San Francisco," he said.

"It’s impossible to describe the blood, sweat and tears that have gone into what is inside these boxes."

The firm is also continuing to grow its operation in San Francisco, with offices based in the Californian city.

Brewbot began its foray into the global technology industry thanks to crowd-funding.

It raised more than £114,000 in one month through Kickstarter.

It also secured £1m from a range of investors as part of a new round of seed funding.

The tech end of the business has also recently taken on some top talent, including a former employee at Tesla in San Francisco, as well as a senior brewer to bring its beer creations to life.

It has already worked with some of the world’s top breweries - including Russian River in the US and the Galway Bay Brewery in the Republic.

It now boasts more than 200 bottled beers and a rotating range of draft brews on the Ormeau Road.