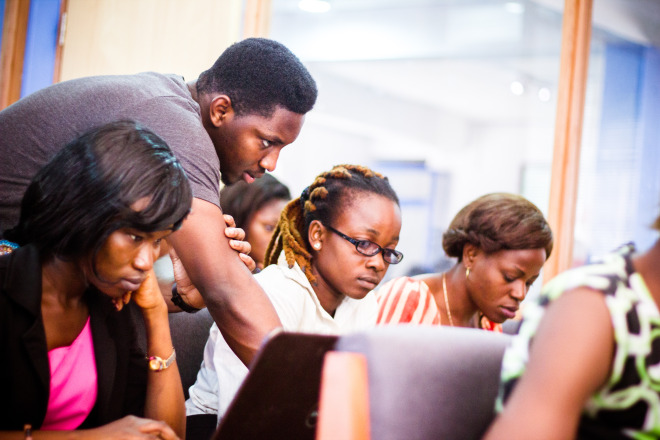 Chibuzor Obiora was an out-of-work TV news anchor in Lagos, Nigeria when he came across a curious link on Twitter: a company was offering money to people willing to take a course in computer programming.

For Obiora, it sounded too good to be true. “I was always interested in learning [to code] because of the problem solving aspect of it,” he says, “and here was a firm that promised to pay you to learn.” But it turned out to be a very real opportunity.

The company is called Andela. It’s based in New York City, and it pays Nigerians to learn programming skills before putting them to work on projects that serve businesses back in the States. After about four months of training, Obiora now works under Andela as a web development contractor for an (unnamed) U.S. based organization—all without leaving Nigeria.

The ultimate aim is to tap the vast pool of talent found in countries that aren’t exactly known as technology hubs, including not only Nigeria but other parts of Africa. “We know that brilliance is relatively evenly distributed across the human population,” says Andela co-founder Jeremy Johnson. “In terms of pure aptitude, there are genius level people across the world. But what there’s not is equal opportunity.”

Today, U.S. tech companies aren’t shy about saying they have trouble finding programming talent. Critics argue this talent shortage has more to do with stinginess and selective hiring practices than a real lack of qualified programmers, but regardless of the reasons, the need is there. As a result, a new wave of services are working to train enormous numbers of new programmers.

The operations range from online tutorial services like Codecademy to the dozens of “code bootcamps” that promise to get people job-ready in a matter of months. Andela puts a new twist on the bootcamp idea by moving them overseas—and paying people to participate.

Johnson, who previously founded the online education company 2U, launched Andela earlier this year, alongside Christina Sass, who has a background in non-government organizations, Iyinoluwa Aboyeji, a Nigerian entrepreneur who previously co-founded the online education companies Bookneto and Fora, and Ian Carnevale, who was also a co-founder of Fora. 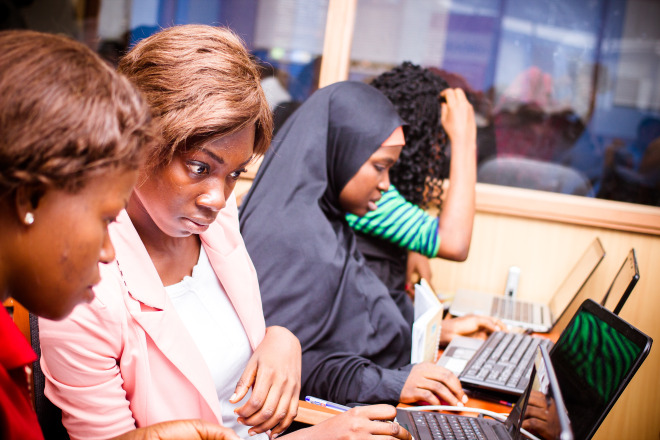 To find good students, Andela gives people like Obiora an online aptitude test that gauges their reasoning and logic skills. Then it interviews the top 10 percent, accessing their “soft skills,” such as interpersonal communication. Those that pass this phase go on to a several-month training program, not unlike the code bootcamps in the U.S. But not many make it this far. “It’s the most selective training program on the African continent,” Johnson boasts, saying the company only accepts about 0.8 percent of applicants.

Those who are accepted get access to educational resources that are scarce in Nigeria. One student, Tolulope Komolafe, says her computer science courses in university didn’t involve any actual programming. The teachers just wrote code on a chalk board. “During the first two weeks of training I discovered that I actually knew nothing about coding,” she says.

Students who finish at least 1,000 hours of training are then eligible to work as web developers for Andela’s clients, but they continue to learn new skills. Johnson says most students will spend about two-thirds of their time working for clients, and the remaining time on education. All told, both the students and staff work about sixty hours a week.

“It’s very similar to the way that guilds worked in the middle ages,” Johnson says. “You get paid a small amount as an apprentice, then you work as a journeyman with lots of other craftspeople, and eventually become a master.”

Johnson says the company charges clients about half of what they would pay a domestic developer, and that students are payed a middle class income in their home countries throughout the program, including during the training period. But he declined to provide specifics. Obiora says that the compensation is fair and that it’s more than he made at his previous job as a news anchor at a local television station.

A New Kind of Off-Shoring

Offshoring development work is nothing new. But Andela does things a bit differently. Instead of its students handling a client’s project on their own, they work hand-and-hand with workers inside the client company. Obiora, for example, participates in his client’s Slack chat room, uses the same project management tools they do, and he’s part of the same email conversations that drive those projects. Like other Andela students, he works the same hours as his U.S. counterparts.

As for the quality of the work, Andela’s developers are on par with local junior-level web developers, says Scott Gerber, founder of Young Entrepreneur Council, an invitation-only organization for entrepreneurs under 40 that hired Andela to help build new features for its web-based member services. “I was skeptical at first,” he says. “I thought: ‘Outsourcing development? I’ve seen this before, I know how it turns out.’ But I can’t speak highly enough of them.”

He says that he prefers to hire locally, and that he does have many developers in the U.S. But ultimately, he can’t find enough coders. “It’s very difficult to get developers at the caliber we need at a price we can afford,” he says. “We’re a multimillion dollar organization, but we still can’t compete with Google or Facebook for hiring.”